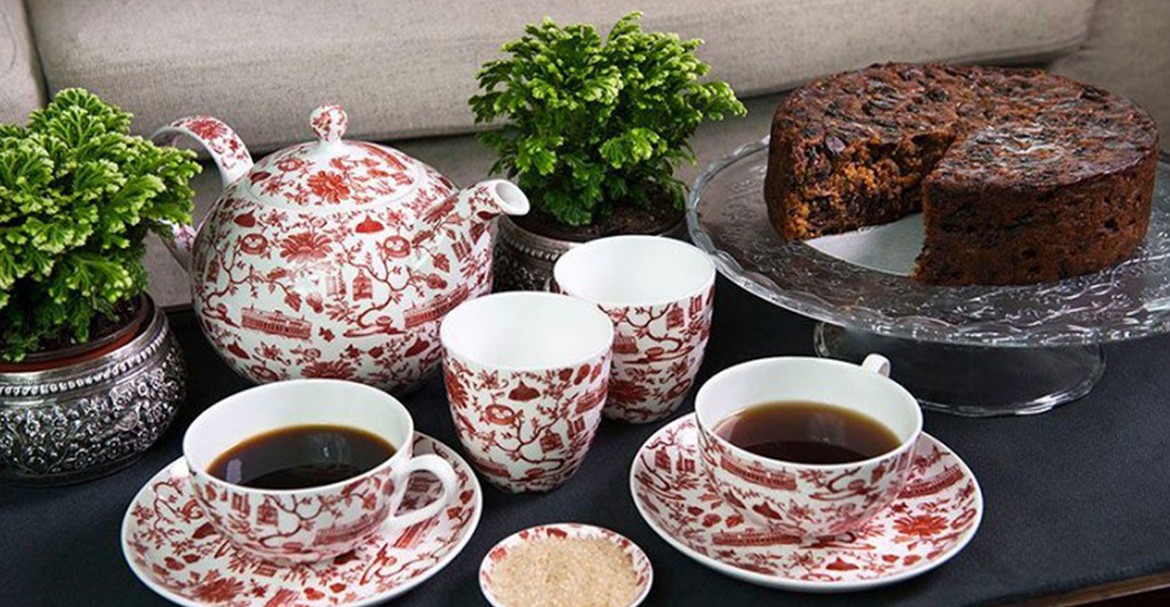 “Toile de Jouy”, sometimes abbreviated to simply “toile”, is a type of decorating pattern consisting of a white or off-white background on which a repeated pattern depicting a fairly complex scene, generally of a pastoral theme such as a couple having a picnic by a lake or an arrangement of flowers. The pattern portion consists of a single color, most often black, dark red, or blue. Greens, browns, and magenta toile patterns are less common, but not unheard of. Toile is most associated with fabrics (curtains and upholstery in particular, especially chintz), though toile wallpaper is also popular. Toile can also be used on teapots, beddings, clothing, etc. In upper-class (primarily American, but also northern European) society, toile is often seen on dresses or aprons used at such events as country-themed garden parties or tea parties.

Toiles were originally hand-made in Ireland in the mid-18th Century and these ceramics quickly became popular in Britain and France. [The term, Toile de Jouy, originated in France in the late 18th century. In the French language, the phrase literally means “cloth from Jouy-en-Josas” a town in the south-west suburbs of Paris.

Although it has been continuously produced since then, toile experienced a marked upsurge in popularity around the year 2000 with a rise huge rise in pottery workshops creating unique toile designs. Previously only a decorating design, designers have been recently experimenting with toile-patterned apparel as well, although toile-patterned shirts were widely worn in the 1970s.

Faux, a boutique design house based in Hong Kong have taken the toile pattern in a new direction making it contemporary by collaborating with artist Mariko Jesse who grew up in Hong Kong to a Japanese mother and English father, her cultural nuances understanding and experience delicately placing her at the cusp of East and West.

And in collaboration with Faux, Mariko Jesse, one of Hong Kong’s most successful commercial artists has designed a series of beautiful toile designs based on Hong Kong, London and the newly created Beijing Toile and these designs have been proven very popular worldwide.

Mariko’s original Hong Kong Toile design centers on an overall floral pattern. It’s a tree with a flower embodying modern and traditional Hong Kong motifs including an egg tart, a taxi, a hanging street market lamp and the iconic Star Ferry, which have been delightfully incorporated into this classic design. The products developed from mugs, as well as fabrics, bedding. In addition, Jesse has developed London toile collection the Hong Kong toile design include a ceramics such as tea sets, dinnerware, east-meets-west cups, noodle bowls and Chinese serving sets.

The artist’s London toile series centers on an overall floral pattern; a rose embodying modern and traditional London icons, including the Albert Bridge, telephone box, post box, a bobby, a London cab, the Royal Albert Hall, the Shard and many more, which have been delightfully incorporated into this classic design.  This unique collection offers tea sets, dinnerware, napkins and tea towels.

Jesse’s the Beijing toile takes on an air of sophistication with its elegant pattern that centers on a chrysanthemum pattern with the Great Wall connecting the delightful Beijing icons that have been wonderfully portrayed in this beautiful toile design.

Faux was established by Louis Papachristou, and architect Hugh Zimmern in 2006 to offer a wider choice or original home décor products to the market. Passionate supporters of the arts, they set up Artists’ Editions at Faux to marry their expertise in the world of architecture and interiors – textiles, ceramics, and rugs – with works by contemporary artists. Artists’ Editions enable artists to explore different ideas and express themselves through mediums not normally associated with their work while giving their work exposure to a wider audience as functional art. These beautiful collections are growing every year, garnering much interest at home and overseas. Faux also provides home interior design services in Hong Kong.